How to value a wrongful death claim in NJ

Financial Impact vs Emotional Loss in Wrongful Death Cases Mercer County NJ In New Jersey, the value of a...

If you were stopped while driving safely, within the speed limit, and not breaking any traffic law, the police... 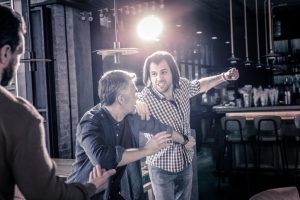 An assault charge can happen to anyone. Perhaps you were out with friends celebrating when an argument broke out. Maybe a few people had been drinking. When alcohol is involved, minor disagreement can quickly escalate into physical altercations. Unfortunately, New Jersey law enforcement won’t care about the reasons for the quarrel; they often arrest everyone involved and let the prosecutors sort it out later. Moreover, New Jersey prosecutors interpret the simple assault law very broadly so that just about anything can constitute an assault. In fact, even an aggressive statement can result in assault charges. Worse yet, because an assault charge tends to be associated with physical violence, NJ prosecutors won’t hesitate to seek the maximum penalties in these cases.

Kamensky Cohen & Riechelson is a highly respected law firm that has been representing clients in New Jersey and Pennsylvania for more than 40 years. Our criminal defense lawyers appear on a daily basis in courtrooms throughout Mercer County, NJ, including Pennington, East Windsor, and Hopewell Township. Beyond that, our litigation team includes a New Jersey Certified Trial Attorney and a New Jersey “Super Lawyer,” so we definitely know what it takes to win these kinds of cases. Call KCR today to begin your defense.

Simple assault charges in New Jersey are addressed by N.J.S.A. 2C:12-1(a). A person may be charged with simple assault under a number of different circumstances:

Intent is not always necessary for a person to be found guilty of simple assault. That’s because the statute specifies that a person can be charged with simple assault if they recklessly caused bodily injury. In other words, even if you made a mistake and accidentally injured another person, you could face significant penalties.

The standard of conduct is even lower when a deadly weapon was involved. In these instances, a defendant may be found guilty of simple assault if they acted negligently. Moreover, just about any object can constitute a “deadly weapon” under certain circumstances. 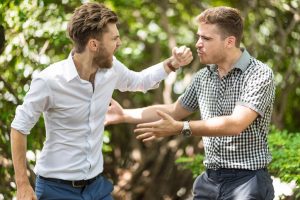 Simple assault is typically classified as a disorderly persons offense. This means that anyone found guilty of simple assault may be sentenced to up to 6 months in the local county jail and fined as much as $1,000.

Under certain circumstances, simple assault can be classified as a petty disorderly persons offense. If you committed a simple assault during a fight or scuffle entered into by mutual consent, you will probably be charged with this lesser offense. A conviction for a petty disorderly persons offense may result in a sentence of up to 30 days in the local county jail and a fine of as much as $500.

The court may also impose civil penalties and order an offender to pay restitution to the victim. This often happens when the victim suffers serious physical injuries and had to go out of pocket to pay their medical bills.

Certain categories of victims are afforded special protection by the law. If the victim was a public official, such as a police officer or a firefighter, the charge can be elevated to aggravated assault, which is a felony-level offense.

The penalties in these cases are determined by the harm done to the victim. Most of the time, an assault committed against a public official will lead to fourth-degree felony charges, which carry a potential penalty of up to 18 months in NJ State Prison. However, if the simple assault resulted in bodily injury to the public official, the defendant may be charged with a third-degree felony and sentenced to 3–5 years in NJ State Prison.

The attorneys at Kamensky Cohen & Riechelson are prepared to fight your simple assault charges and help you avoid a conviction. Call us now at 609.528.2596 to discuss your case, or fill out the online contact form to schedule a free consultation at our Trenton or Pennington offices.